Power BI is the umbrella term for a collection of cloud-based apps and services that enable businesses to collect, manage, and analyze data from a variety of sources using a simple user interface.

Power BI and other business intelligence software can be used for a variety of tasks.

Power BI primarily gathers and processes data, then transforms it into understandable insights, often using visually appealing and simple-to-understand charts and graphs. Users can now create and share clear and useful snapshots of what’s going on in their company. 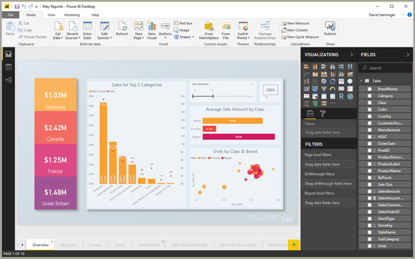 Power BI connects to a variety of data sources, ranging from simple Excel spreadsheets to databases, as well as cloud and on-premise apps.

Because Power BI is based on Microsoft Excel, the transition from Excel to Power BI isn’t as difficult; anyone who can use Excel can use Power BI, but the latter is far more powerful than its spreadsheet counterpart.

How Power BI can help your Business

Microsoft Power BI is a business intelligence tool that can be used to generate reports and uncover insights from a company’s data. Power BI can connect to a variety of data sources and “cleans up” the information it receives so that it can be more easily digested and understood. This data can then be used to generate reports and visuals that can be shared with other users.

Power BI allows users to see not only what has occurred in the past and what is occurring now, but also what may occur in the future. Machine learning capabilities are built into Power BI, allowing it to spot patterns in data and use those patterns to make informed predictions and run “what if” scenarios. Users can use these estimates to make forecasts and prepare themselves.